Laos has a unique charm of a relish sleepy place, with ever-friendly people and great natural beauty. The upper Mekong river runs through the entire country – from the famed northern Golden Triangle to the southern tip, leaving behind a blissful magnificence.

THE MAGNIFICENCE OF LAOS

A land of bottomless serenity and beauty

Spectacular riverine sceneries
A cruise along the upper Mekong is a mesmerizing journey, meandering between countless river bends and captivating landscapes. The river, the mountains, the jungles, the shores, the hidden villages, and the rocks which embrace this river all feel untouched, while the therapeutic sounds of running water and nature puts one’s mind at ease. At some points the river becomes narrow, flanked by jungle cladded mountains, at others it gushes and cascades through the rocks and rapids, and in particular areas tranquil waters flow calmly past sandbanks and settlements.

There is a certain juxtaposition about the river – ever-changing yet not changing at all – though always a blissful experience to explore the charm of Laos along the Mekong. 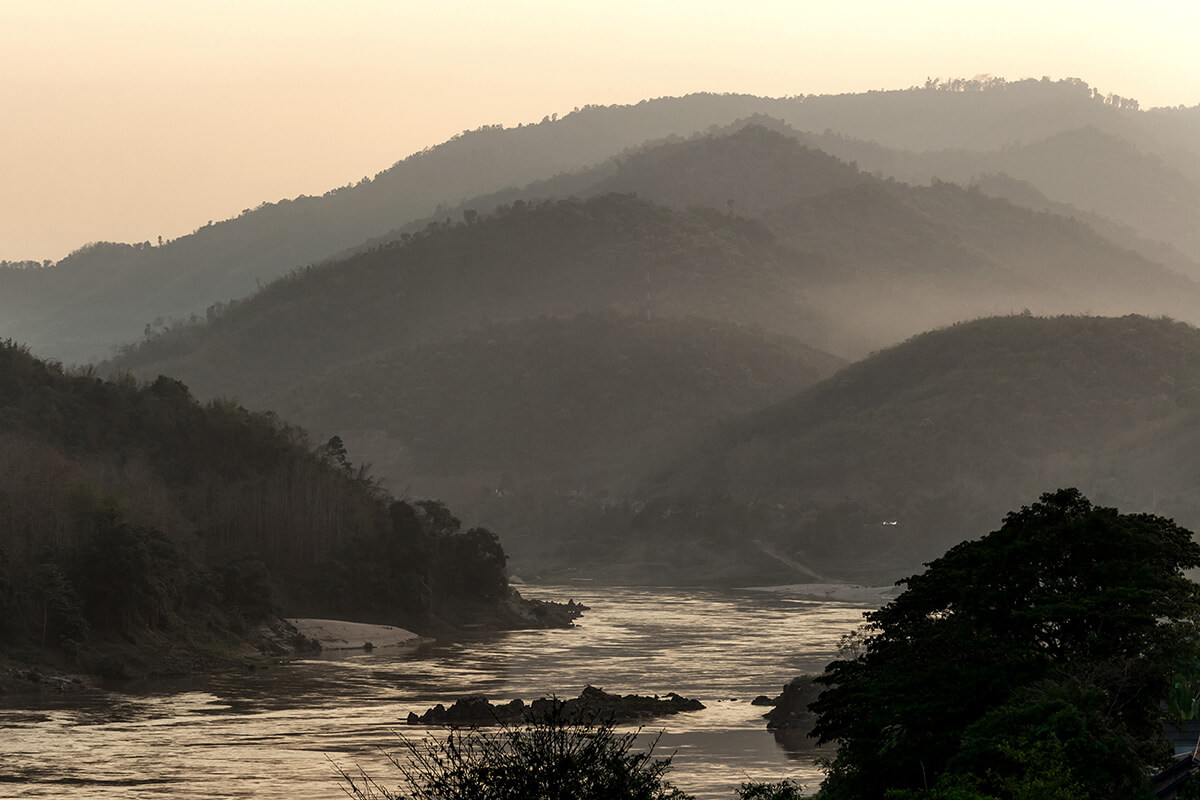 Captivating ethnic minorities
and riverside hamlets
In contrast to being one of Asia’s least densely populated nations (7 million inhabitants and roughly the size of the UK), Laos is also one of the continent’s most ethnically diverse. There are four main ethno-linguistic families: the Lao-Tai group (60%), Mon-Khmer (24%), Hmong-Lu Mien (10%), the Chine-Tibetan (3%). These four families are then divided into 50 ethnic groups, which can be further broken down into more than 200 ethnic subgroups. The majority of Laos’s population lives along the banks of the Mekong or one of its many tributaries, and there is an especially high concentration of ethnic groups along the stretch of river between Luang Prabang and the Golden Triangle, including the Akha, Hmong, Mon, and Khmu. Many ethnic groups still retain their beliefs in Animism and worship their ancestors. 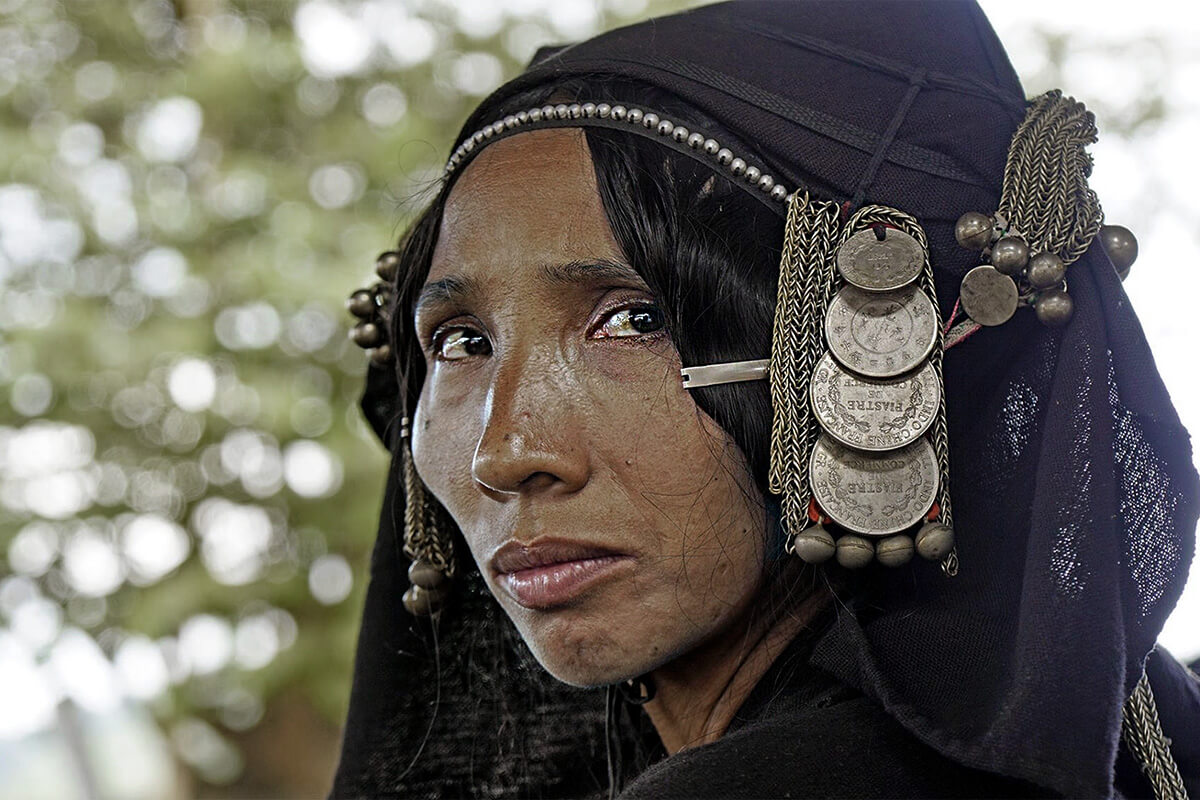 The most beautiful city
For many, the town of Luang Prabang is the most precious jewel of Southeast Asia. Home to over 30 Buddhist temples and monasteries, Luang Prabang’s name literally translates to “Royal Buddha Image.” With a population of just 55,000 (Vientiane 820,000), Luang Prabang is a quaint little town with an inescapable charm which can be attributed to its picturesque Banyan tree-lined street, the French-colonial influence, traditional wooden architecture, tranquil Buddhist feeling, and laissez-faire atmosphere. This remarkably well-preserved fusion gives the town its true distinction and status as a UNESCO World Heritage Site (1995).

To moodle through this enchanting town and idle time away is the best way to find out the charming, cultural heart of Laos. 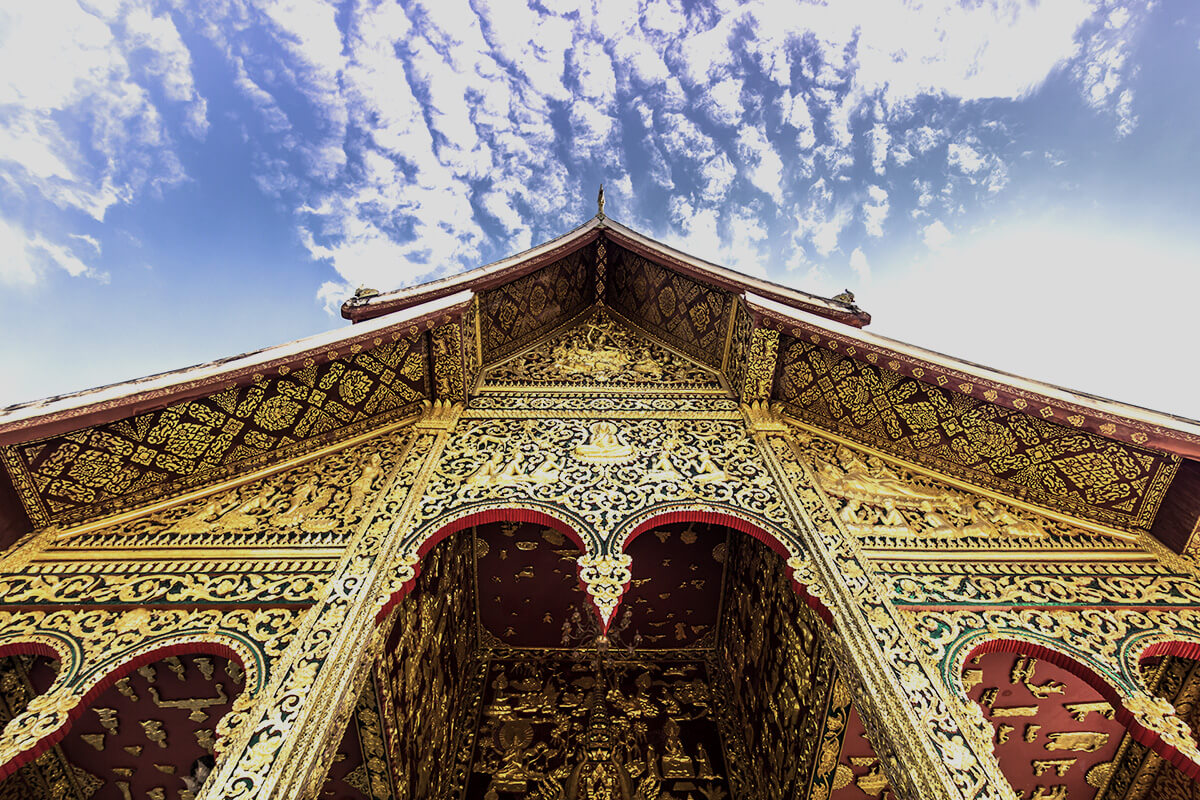 Delightful local Artistry
Similar other Southeast Asian countries, Laos is also renowned for its natural silk crafts. But unlike its neighbours, Laos’s premium silk products are completely organic and solely woven by hand. The weaving process may vary not just among the different regions of the country, but also between households as a result of techniques passed on from generation to generation. Each silk-woven item is truly unique, having its own distinguishing designs and patterns.

On average, a local silk weaver can create a metre of garment a day, but for some of the more intricate items it is often only a couple of centimeters. It can even take a villager more than a month of meticulous dexterity to finish a single garment. 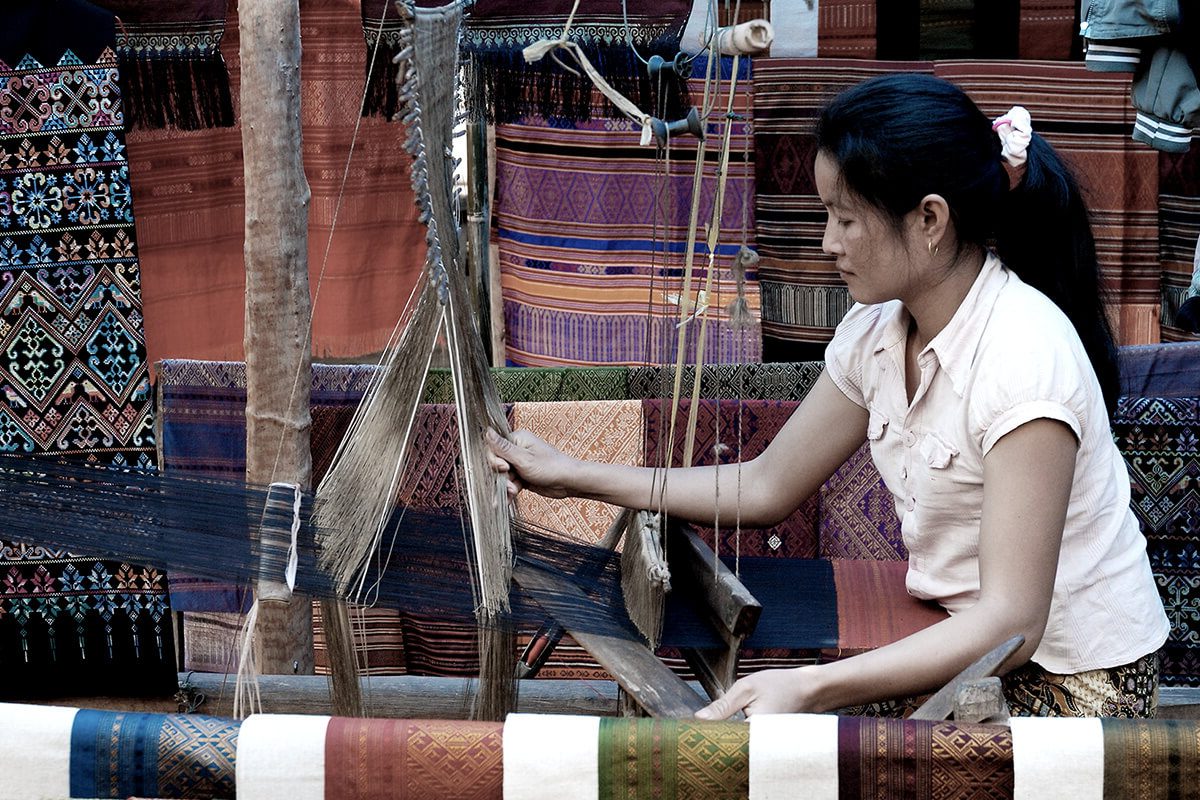 The soul of Asia
When visiting Laos for the first time, one may notice immediately that something is different. Something that cannot be described in words floats invisibly through the air. Local encounters are embossed by a smile and admiration. Kindness, tenderness, compassion, empathy, or the slowness seems to emanate from every living soul; from the buildings and the nature. Buddhism, is a part of everything here. Some who experience Laos for the first time may be so captured by this peacefulness that they return over and over again.

This may be, or is, the only reason to visit this wonderful country. 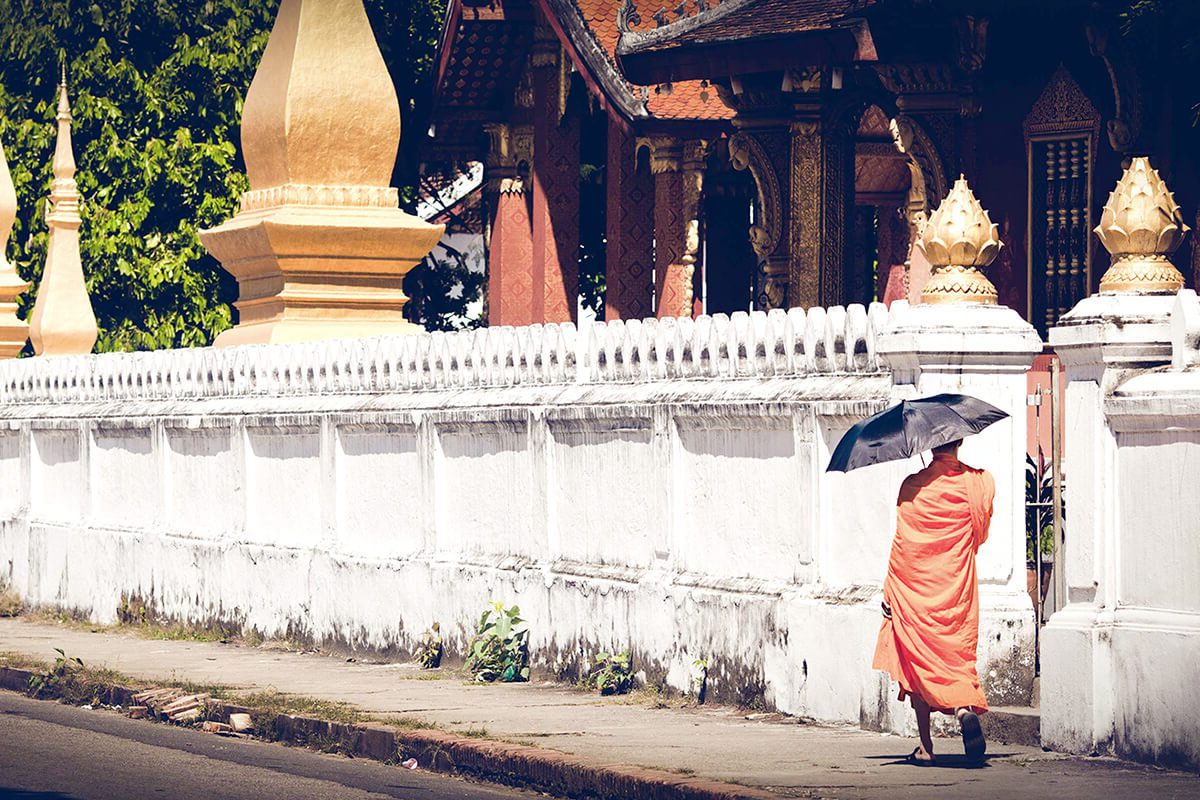 Laos’s Climate
Sabai sabai - Take it easy
When visiting Laos, one can be rest-assured that they will have an enjoyable experience regardless of time of the year. The best time to visit Laos is during the dry and relatively cool months from November to March. As a land-locked country, Laos’s geography heavily influences the weather. For example, in the northern regions it can get quite chilly at night, especially during the winter months of December and January. From May to October, Laos (as all of the Southeast Asian countries) goes through its rainy season and the Mekong’s water levels rise. Since rains are usually short and sharp, excursions and sightseeing should not be heavily impacted. But travelling during this period is also special, as vegetation is green, the locals are pleased about the rain and, above all, visitors can experience the true serenity and slow-paced charm of Laos during the low tourist season. 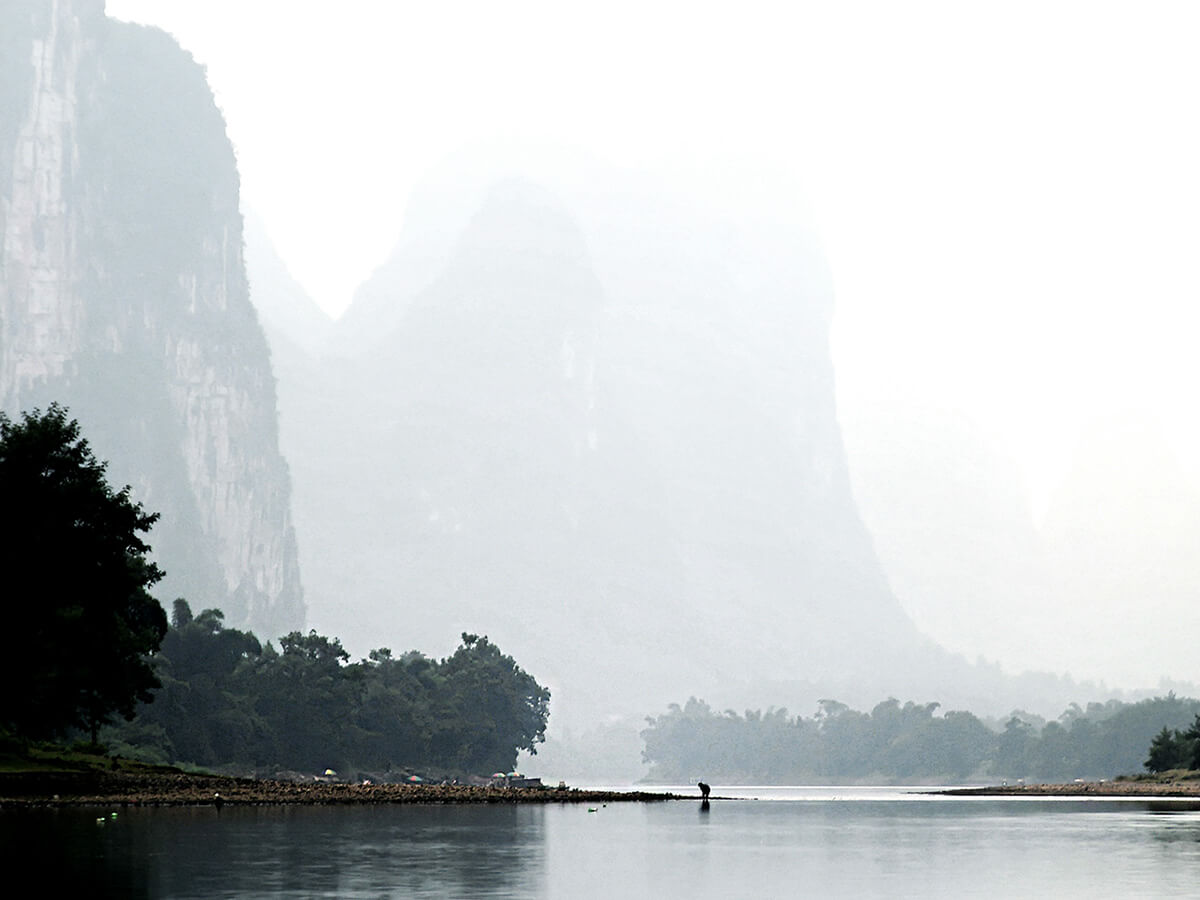 A brief History of Laos
How the past shapes the present
Many Laotians are the descendants of settlers from the Chinese province of Yunnan. In the 14th century, the first Lao kingdom was founded by Fa Ngum. He had grown up at the court of the Khmer king, where he learned more about Theravada Buddhism and introduced it to Laos to unite the many tribes in his lands. After 200 prosperous years, internal strife took hold and the then large kingdom started to crumble as parts of it were overtaken by the neighbouring Chinese, Siamese and Vietnamese. French colonization was soon to follow. After the Second World War, it was drawn into the Cold War and the Vietnam War due to its location. In the Laotian Civil War of 1975, King Savang Vatthana and his royalist Lao government was overthrown with the assistance of the Vietnam People’s Army, giving birth to the ‘Lao People’s Democratic Republic’ which exists to this day. 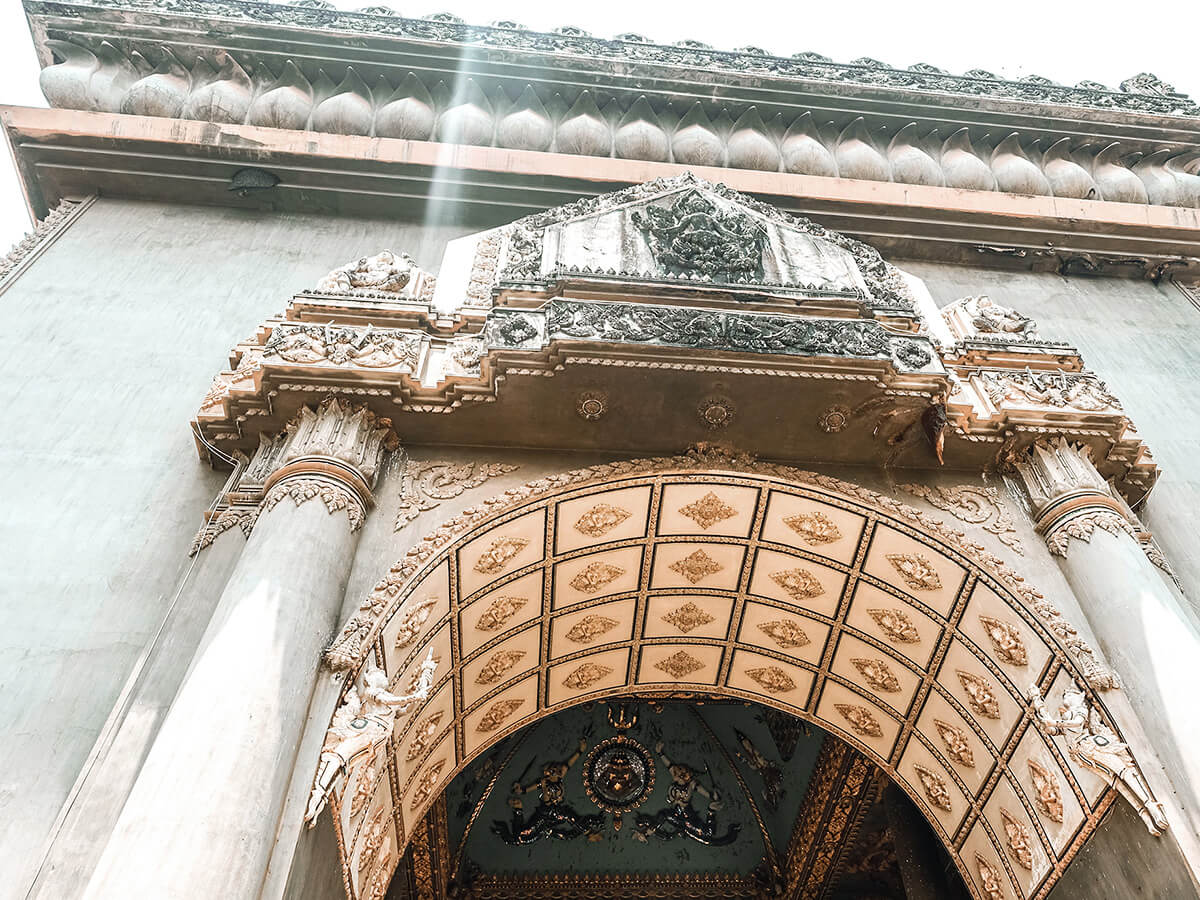 Be a Buddhist Monk
A Lao man has to do what a Lao Man has to do
In Laos, it is tradition for a boy or young man between the ages of 8 and 20 to shave their heads, don the saffron-coloured robe and become a novice monk. A novice typically joins a monastery with other novice monks and elder monks for a period of a few months to several years. Here, they rise at 4 AM every day to attend prayer followed by morning alms, then attend school and do chores until the sun sets. For many children in Laos, becoming a monk is often the only way to access and receive education. Because their teachers are often foreigners, it can be surprising how proficient they can be at speaking English in addition to French, German, or other languages. Rest assured, despite the strict schedule and intensive schooling, elder monks do encourage novices to just be boys during their free time – they can often be seen laughing and playing with each other just as any other child would do. 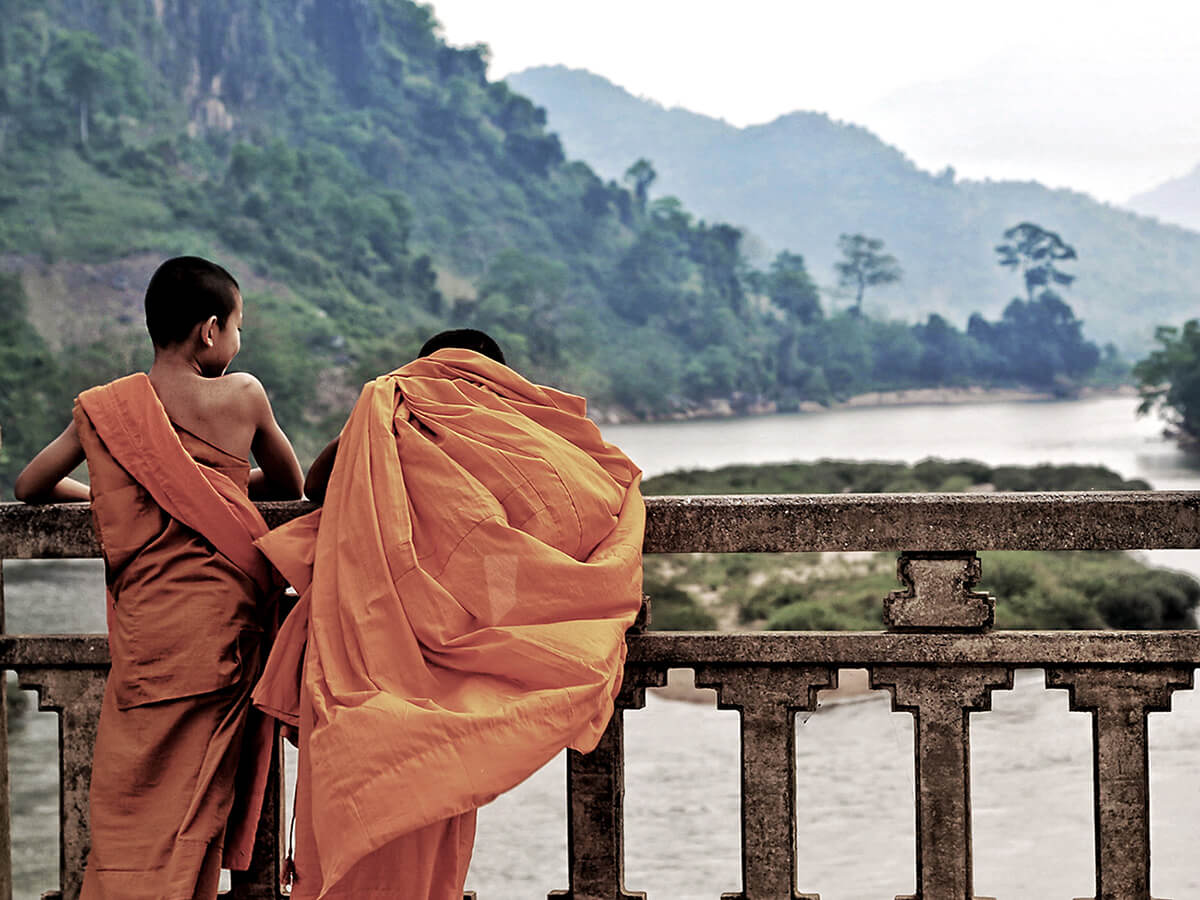 Topping the charts
Where Laos takes a front row seat
Laotians are the highest consumers of sticky rice (khao niaow) in the world. In fact, they refer to themselves as luk khao niaow meaning, “children of sticky rice.” For centuries, sticky rice remains a fundamental portion of every meal in Laos. And surprisingly for a small country, Beer Lao is an award-winning national beer made from rice and yeast imported from Germany and malts from France. It won the Monde Selection gold quality awards in 2006 and 2010, and is arguably the tastiest national beer in Southeast Asia. Though Laos is a completely landlocked country, in the south of the country lies an incredible natural wonder – Si Phan Don, better known as the 4000 Islands. This is a riverine archipelago with countless sandy shores and tropical beach flair, making Laos the only country in Southeast Asia possessing so many islands in absence of the ocean. 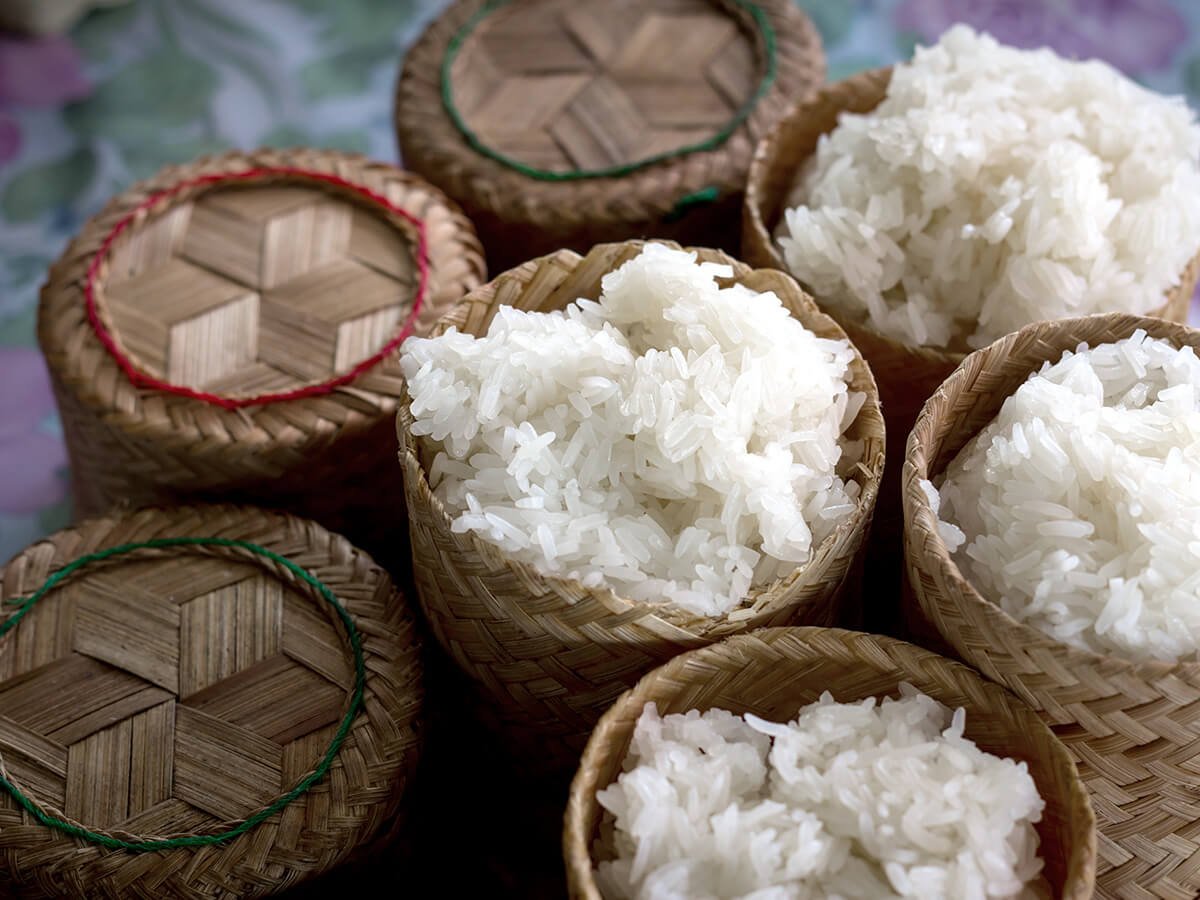 This is Lao Power
The region’s hydroelectric battery
Laos is home the longest stretch of the Mekong river (1,835 km/1,140 mi) among all countries the river runs through. Not only does the river offer plentiful food in the form of fish, water for irrigation, and a pathway for transportation of people and goods, but it also becoming the country’s major natural source of energy production. With the first hydropower plant, Xayaburi Dam, opening 2019 and several more in development, Laos is set to bring in much needed revenue by becoming the battery of Southeast Asia (Xayaburi currently exports 95% of its generated electricity). Though seen as a clean and sustainable form of energy, if not plans are set in place to protect the environment, scientists fear these projects may have a negative impact on the Mekong’s rich biodiversity as well as the river’s agricultural and fishing activities which locals heavily depend on. 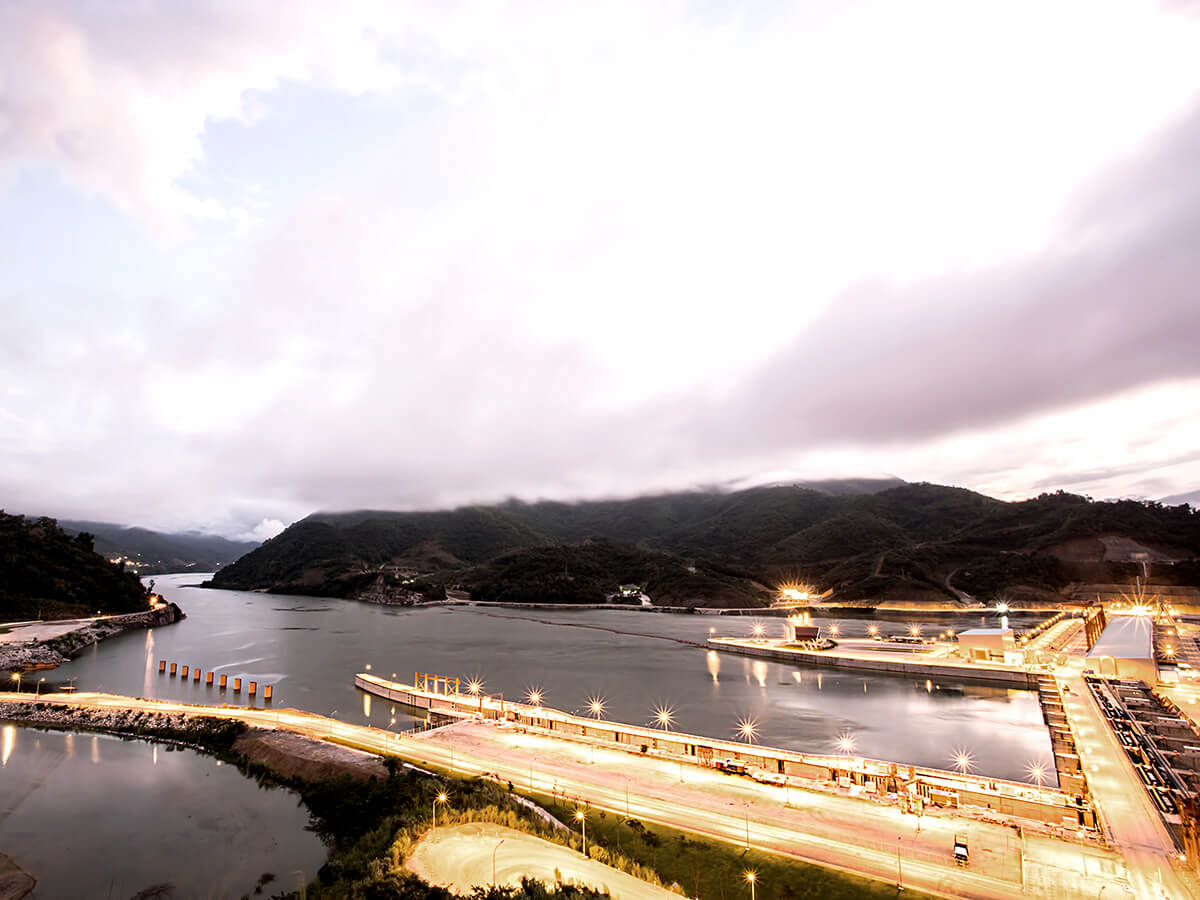 The Land of Elephants
Once upon a time…
The former name of Laos, “Lan Xang” literally means “Land of a Million Elephants”. Though the country’s national symbol once had an abundance of these mighty beasts, today their numbers have dwindled to around 400 domesticated 700 wild elephants due to massive bombing campaigns during the Vietnam war, the illegal ivory trade and habitat destruction. In ancient times, elephants were used to wage war and as the Royal Family’s preferred method of transportation, while in modern times some are still being exploited by the logging industry. But fortunately, this practice, which often leads to overworked and malnourished elephants, has reduced dramatically in recent decades. And because it is not possible for a former logging elephant to survive in the wild, several sustainable elephant sanctuaries have been established across Laos, allowing these gentle giants to survive in a natural environment and giving them a second chance at life. 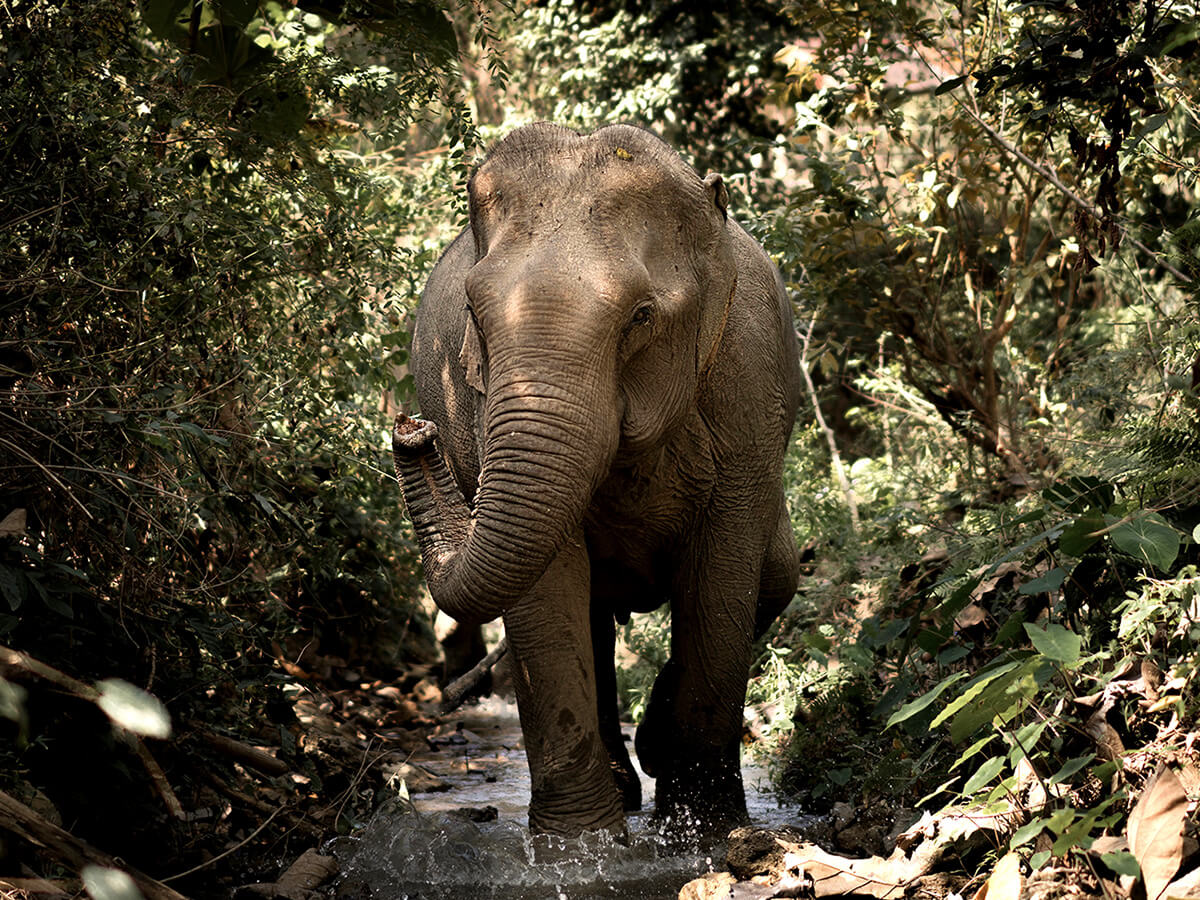 Explore the world of Heritage Line with our news, updates and stories 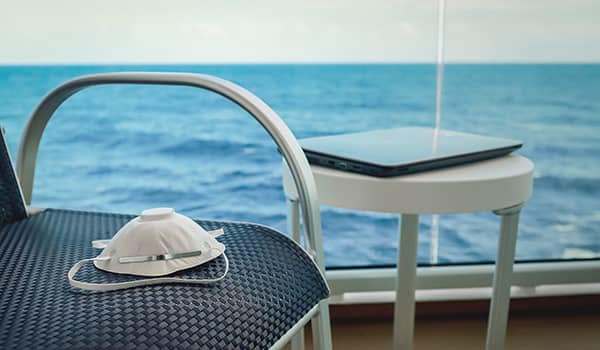 Our Health and Safety Measures

Passenger and crew safety and well-being is our mission when cruising with Heritage Line, especially in the post-pandemic season. 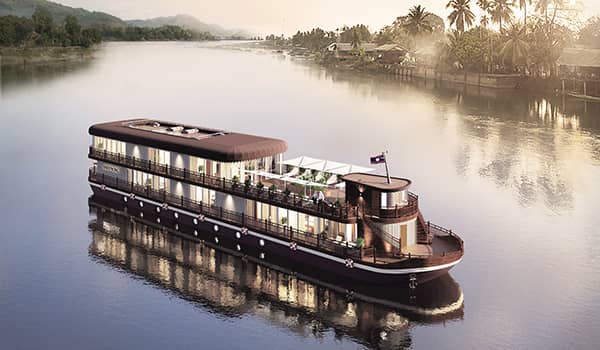 Due to an unprecedented number of enquiries in the recent months, we have added additional 7- and 9-Night cruise departure dates to the calendar. 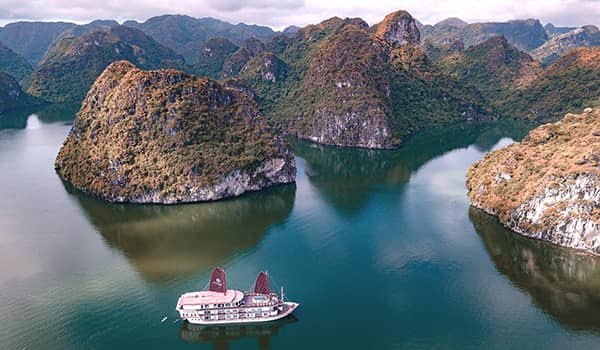 When planning a trip to Vietnam, it may be beneficial to know the differences between legendary Halong Bay and it’s remote lesser-known neighbour, Lan Ha Bay. 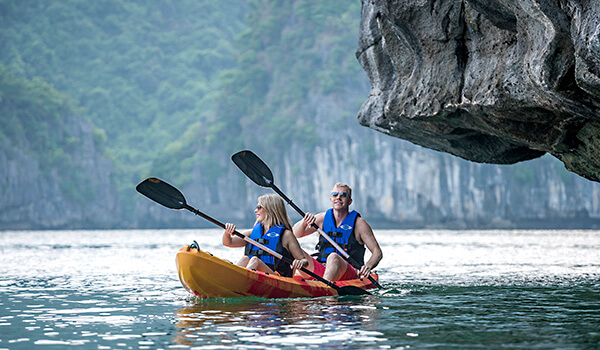 Travel at your own pace in the Lan Ha Bay

Travel at your own pace - a truly unique experience with Heritage Line's luxurious ship Ylang cruising in the breathtaking Lan Ha Bay. 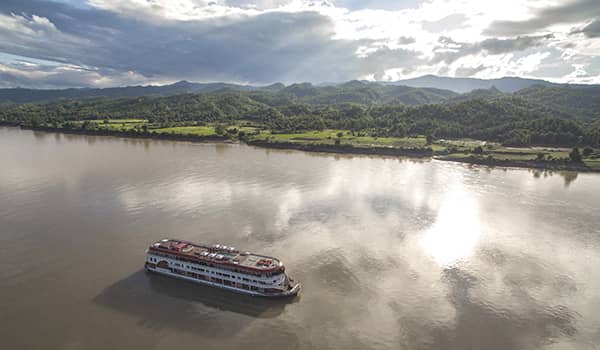 Reasons to Take a River Cruise

Despite river cruising’s recent rise in popularity, most travellers have yet to experience it for themselves. Which brings us to the question: Why should I consider a river cruise for my next holiday? 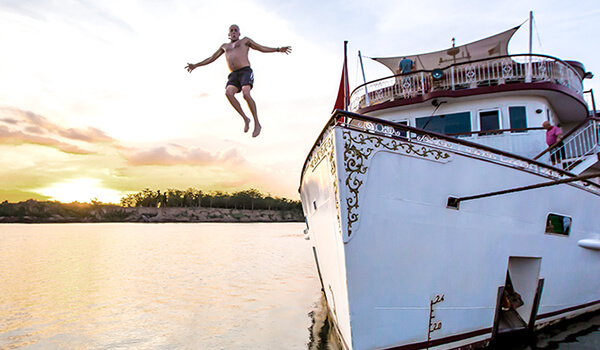 Freedom of Traveling to Vietnam is back!

Vietnam is open and travelling without restrictions is possible again. Check out the latest travel protocol. 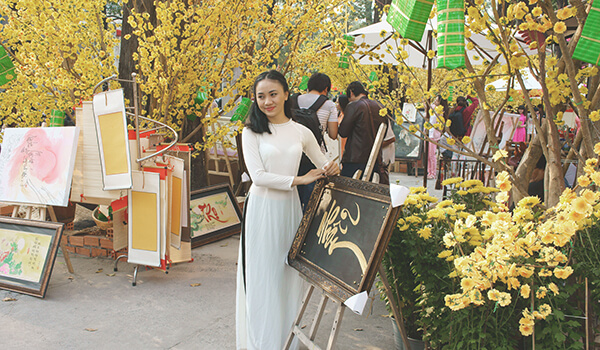 Known locally as Tet, Vietnamese Lunar New Year is undoubtedly the country’s most important holiday, spent with family while enjoying the feasts and festivities. 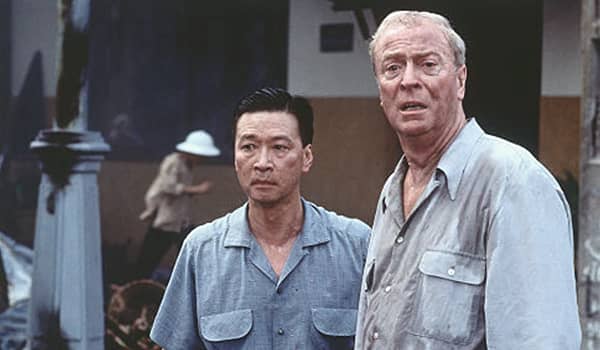 Top Movies Set in Vietnam (But Not About the Vietnam War)

The best known movies set in Vietnam are undoubtedly about the Vietnam War. Instead, we’d like to highlight the beauty of the country through films not directly related to the war. 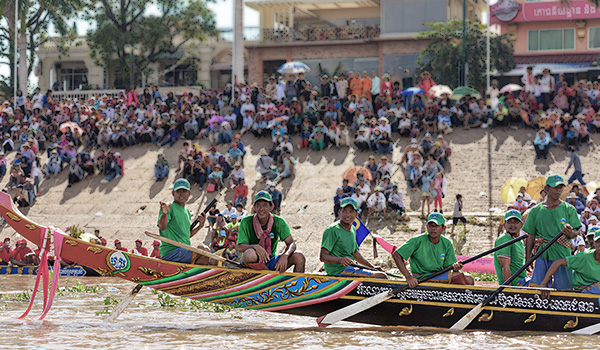 Bon Om Touk, or the Cambodian Water Festival, is undeniably the country’s largest and most celebrated holiday of the year. 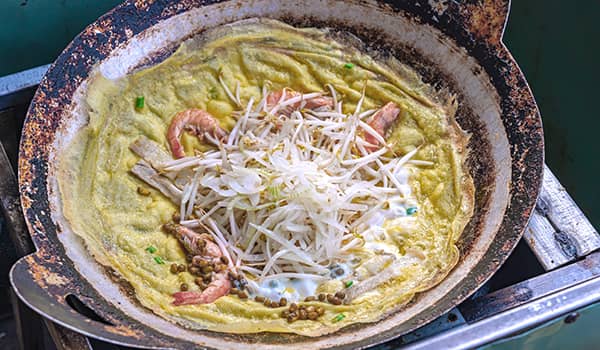 As a crispy, savoury street side snack, banh xeo, or Vietnamese pancake, is another entry from Vietnam’s vast repertoire of culinary delights.

In order to provide you with an optimal experience, Heritage Line uses cookies to collect your browser and device information for personalized marketing and for making improvements to our website. Please see the Cookies section of our Privacy Policy for more information.