A most romantic cruise liner

The enchanting The Jahan captivates and transports guests back in time with an aura evoking the glory of former British-India. Named after the celebrated 16th century Indian emperor and great patron of the arts, Shah Jahan, Heritage Line designed this regal craft with fine artworks and outfitting sourced from India.

All staterooms are spacious and have private balconies, though the sprawling Noble Suites offer unparalleled onboard living experiences. The atmospheric East India Club & Lounge resembles an old British-Indian Gentlemen’s Club, while the adjacent sun deck and Jacuzzi pool are a few of the designer vessel's many resort-like facilities. The Jahan sails the lower Mekong between Vietnam & Cambodia on various itineraries.

The Jahan’s story is very romantic, although it is not your typical Hollywood “boy meets girl” romance – think rather of the forbidden fruit, throw in angry parents on the bride’s side and we have a story that will tug at any heart, even the most hardened. Years ago there lived an Indian woman of bewitching beauty, the indefatigable Lady Kashmira. She was a brilliant dancer, a talented artist, an impeccable composer and a prolific writer who had inherited her artistic traits from her ancestor, the revered Shah Jahan, emperor of the Indian Mughal Empire from 1628 to 1658.

The Jahan’s story is very romantic, although it is not your typical Hollywood “boy meets girl” romance – think rather of the forbidden fruit, throw in angry parents on the bride’s side and we have a story that will tug at any heart, even the most hardened. Years ago there lived an Indian woman of bewitching beauty, the indefatigable Lady Kashmira. She was a brilliant dancer, a talented artist, an impeccable composer and a prolific writer who had inherited her artistic traits from her ancestor, the revered Shah Jahan, emperor of the Indian Mughal Empire from 1628 to 1658. Kashmira honored traditions but never shied away from innovations, like the traditional natakas she used for some of her dance-dramas. She also loved traveling and painted her travelogues on exquisite landscapes.
And she fell madly in love with the British poet Lord Byron. Her family strongly opposed the union. They wept and tried to cajole her because they wanted her to marry an Indian aristocrat. But she refused to follow the script. Kashmira and Lord Byron eloped, escaping the clutches of her family in search of true love, and they lived happily together on a boat, aptly named The Jahan, after her illustrious ancestor. Lady Kashmira spent most of her time recreating her childhood memories in The Jahan. The rooms were reminiscent of her adolescent years and the colors and hues of the boat were tastefully chosen. The couples’ room was in white marble as a lasting tribute to the glorious Taj Mahal, which was built by Shah Jahan in memory of his third wife. One of the most beautiful buildings in the world, it still stands today as a symbol of eternal love.
Indeed, Lady Kashmira’s artistic skills turned The Jahan into a harmonious mélange of East and West. But alas, the love story tooka heartbreaking turn when the British troops withdrew from India in 1947, and Lord Byron had to return to England. Lady Kashmira remained in India as she could not tear herself away from her family or her country. She was heartbroken but continued to care for the boat and she displayed her paintings in The Jahan, drawing admirers from all over the world. Then one day, to her utter joy, Lord Byron returned to India and he lived with Lady Kashmira until his death in 1977. As they were childless, Lady Kashmira sold the boat and donated the proceeds to a school of arts for the impoverished children of Rajasthan.

A wide range of luxurious, resort-like amenities aboard The Jahan

The Raj of India Lounge

The extravagant lobby lounge, with its Old-English styled reception, is a perfect place to kickback.

Emanating a classic East-Indian ambiance, this open-air bar with sofa lounges and rattan chairs, is perfect for enjoying the life of Riley.

The Observatory Lounge located at the ship’s bow features a stylish Indian set-up with plush divans – a nice hideaway at any time of the day.

The pool, constructed with intricate Turkish mosaic tiles and encircled by shaded loungers, is the centerpiece of the terrace deck.

With three treatment rooms and wide selection of aroma oils to choose from, our packages are guaranteed to keep you coming back for more.

Burn away some calories on a cardio machine, then head to the steam bath afterwards for peaceful relaxation.

All are appointed with a cozy lounge corner, private balcony, and spacious bathroom with walk-in shower.
View room in detail 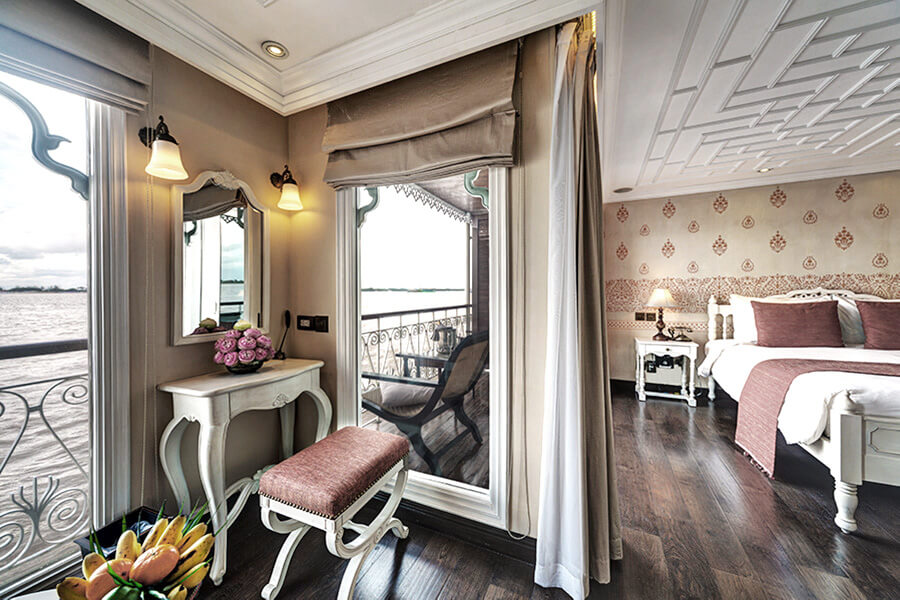 Sporting an identical layout and amenities as the Superiors, the Deluxe Staterooms are located one floor higher on the upper deck. Their designs differ from the former, featuring warm orange hues, dark colonial furniture, and hand-painted ornaments.

The Jahan hosts two awe-inspiring Noble Suites. Like an Indian Raj-era palace, the Taj Noble Suite is the epitome of luxury, complete with two balconies (one with private Jacuzzi) and huge bathroom.

Enjoy your stay aboard The Jahan to the fullest

“Traveling – it leaves you speechless, then turns you into a storyteller.”
– Ibn Battuta

The most popular and complete Mekong cruise combines opulent world heritage sites in Vietnam & Cambodia with places that are rarely visited.

The best of rural Cambodia with great landscapes, ancient temples, charming villages and smiling faces offering insights into some widely unknown parts of this amazing country. (3-Nights available downstream only).

A shorter voyage linking two countries and the two “pearl” cities of South East Asia, Saigon and Phnom Penh, while offering a detailed exploration of the Mekong Delta.

In order to provide you with an optimal experience, Heritage Line uses cookies to collect your browser and device information for personalized marketing and for making improvements to our website. Please see the Cookies section of our Privacy Policy for more information.